Challenges for Autocatalyst Recyclers in Europe ?

Here is our first report from the IPMI Auto Catalyst & Fuel Seminar recently held in Atlanta…“Challenges for Autocatalyst Recyclers in Europe” was presented by Oliver Krestin, Managing Director of German Company, Hensel Recycling. His views on the challenges ahead covered 3 categories:

20 years ago, there were only two types of catalytic converter used across Europe - those for gasoline-driven, and those for diesel-driven vehicles. Sizes and PGM composition varied, but, essentially, that was it. Since then, new materials, new technologies, and new regulations have led to a plethora of change, with a significant impact on the recycling of precious metals:

Three-Way Catalyst (TWC) - that oxidizes exhaust gas pollutants (hydrocarbons and carbon monoxide) and converts nitrogen oxides into the harmless components water, nitrogen, and carbon dioxide (CO2). Favored for smaller, gasoline vehicles, it has a ceramic substrate with a high palladium and rhodium content.

Selective Catalytic Reduction (SCR) - a proven and advanced active emissions control technology system that injects a liquid-reductant agent through a special catalyst into the exhaust stream of a diesel engine. Its copper zeolite-based catalyst means PGM loadings are low.

Lean Nox Trap (LNT) - used to reduce nitrogen oxides emissions from smaller diesel engines, it has a ceramic cordierite substrate and is a PGM and Barium-based catalyst.

Diesel Oxidation Catalyst (DOC) - an “after treatment” component that is designed to convert carbon monoxide and hydrocarbons into carbon dioxide (CO2) and water, by breaking down pollutants in the exhaust stream in a diesel engine. It contains higher potassium loadings plus some palladium. There is no rhodium used.

Diesel Particulate Filter (DPF) - captures and stores exhaust soot in order to reduce emissions from diesel cars. It contains both potassium and palladium but no rhodium.

These we already know about and have come to understand and manage their impact on the recycling of PGMs. For the future though, particularly in Europe, more changes will be seen. Further legislation is already seeing the introduction of Catalyzed Soot Filters and Selective Catalytic Reduction Filters that do not contain PGMs but do have valuable content including Iron, Copper, Vanadium, and Antimony. The challenge is in developing new technologies that will assist with the economic handling and separation of the different catalysts and filters on the market.

Currently, of course, there remain a vast quantity of cars with “standard” catalytic converters that will require recycling over the next decade or so, and whilst the usage of PGMs in the automotive industry may decline over time, they do have value in other markets to ensure their recovery will remain financially attractive.

Price increases for palladium and rhodium have been dramatic over the past 12 months and, with suppliers traditionally paid “in advance” has meant that refiners have had to inject up to 35% more cash into their businesses. This has created liquidity problems for some players in the industry.

Refining capacity is finite and, given the increased demand in recent years, is limited. Given an uncertain future and the high cost involved, there is currently no investment in new refineries. Additionally, maintenance costs are rising as a result of refineries working at full capacity.

Material mix complexity, as we’ve already mentioned, puts additional economic pressure on refiners as they seek to find the new technologies to help the economic separation of the different types.

Usually, on the subject of regulations, we talk about further restrictions on vehicle emissions. There are, though, two other aspects of the legislation that impact heavily on our industry.

Man-made Refractory Ceramic Fibers (RCFs), used as insulation material in catalytic converters have the advantage over natural materials of being light, relatively inexpensive, and thermally efficient. However, they can irritate the skin, eyes, and upper respiratory tract and there is a concern that the individual fibers are small enough to penetrate deep into the lungs and possibly lead to the development of lung cancer and mesothelioma. Consequently, they are banned in some, but not all, European countries, including Germany, Switzerland, France, and the UK. This leads to additional transportation costs as the catalysts are shipped to countries such as Austria where the legislation is, as of now, not in place. 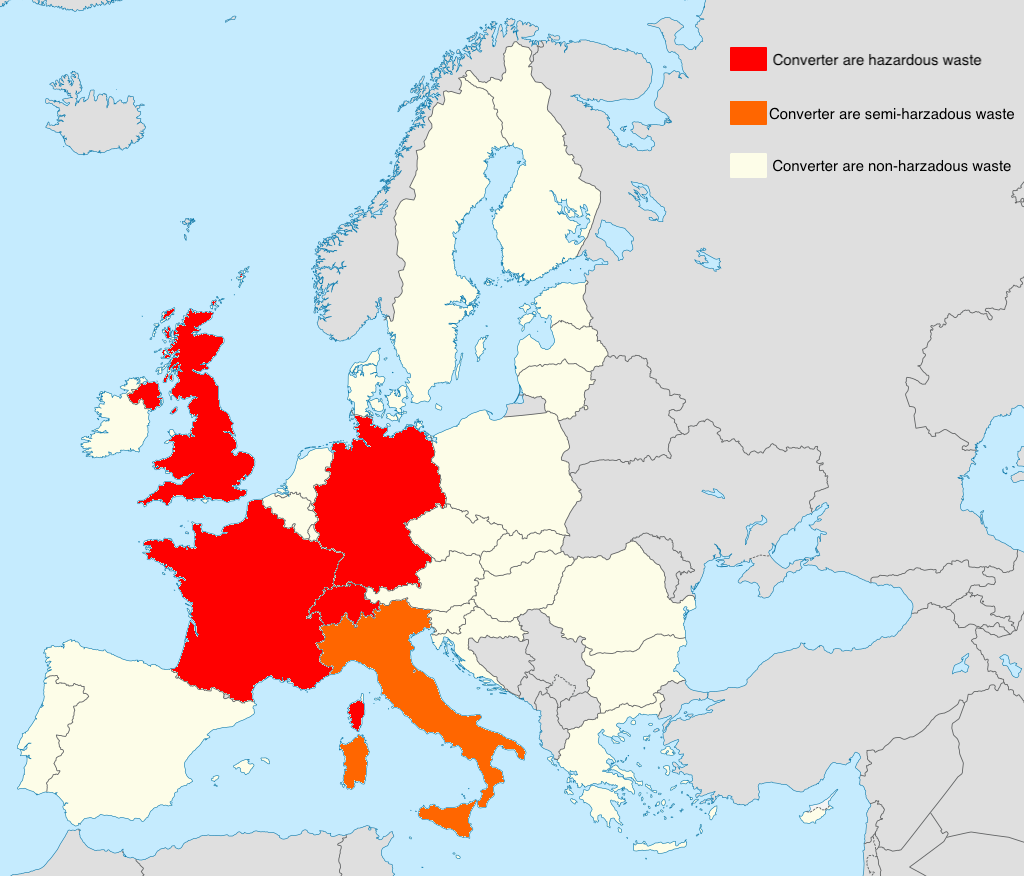 “Cash for Scrap” has been legally banned in some European countries, including France, Spain, Italy, and UK, in an effort to eradicate illegal practices, such as tax avoidance. Any action designed to remove criminal and fraudulent activity is, of course welcome, but undoubtedly removing “cash for scrap” has ramifications for the industry. Cash Ban in the European Union

The PGM recycling and refining industry has been defined by change and we have learned to anticipate and adapt to it. The changes in Europe that we are now seeing are certainly challenging, but also offer opportunities that we believe will benefit those ablest to respond quickly and effectively.