Future of auto catalyst configurations, impact on PGMs, and implications for collectors

Tightening regulations resulting from new legislation, primarily in USA and Europe, have had a significant impact on demand for PGMs in the autocatalyst sector. Now, the burgeoning demand for PGMs from the catalyst market is considerably outstripping demands from elsewhere, particularly for palladium and rhodium, as these two charts indicate:

Autocatalyst Usage as a Percentage of Gross Demand for PGMs 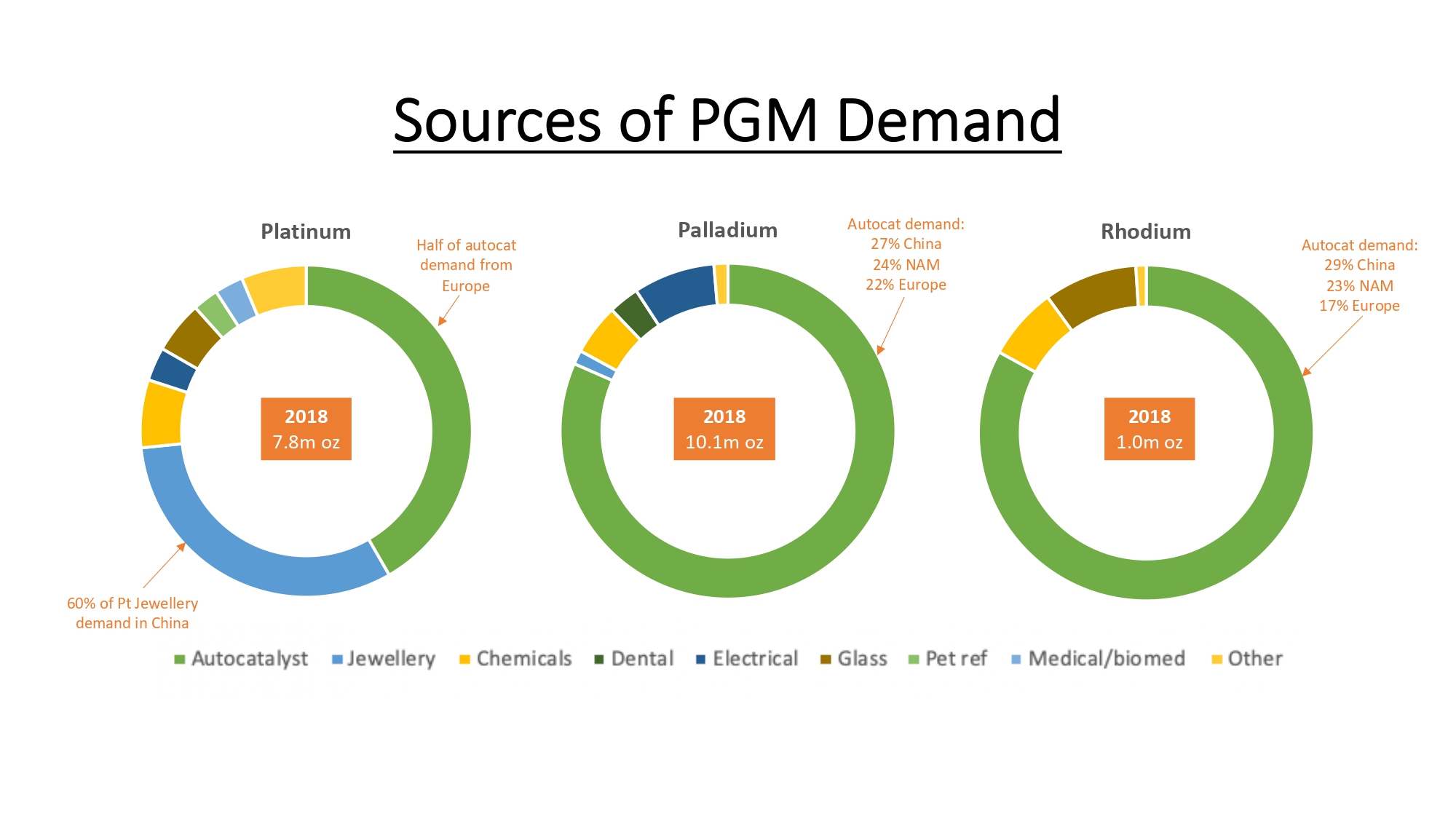 We are currently in a period of global tightening of emissions restrictions with legislation coming on-stream in many of the major countries worldwide:

USA: “Level III” is currently being phased in, with further tightening expected from 2021.

China: “China 5” for diesel engines was introduced last year, with “China 6a” for all vehicles expected from 2020

South Korea: “Euro 6d” for diesel engines was introduced in 2018

Other countries, particularly in South East Asia, are playing “catch-up” - Thailand, for example, is currently operating on “Euro 4”. with, currently, no plans to move forward to “Euro 5” until 2024, although as recently as this month the upgrading of European emission standards is high on the agenda for policymakers.

At the same time as legislation has been introduced to limit pollutant emissions, there have been improvements in the testing mechanisms to ensure that vehicles reflect the legal requirements in real driving conditions.

Originally, testing was carried out on the New European Driving Cycle (NEDC), a procedure designed in the 1980s based on “theoretical” driving. This has a number of shortfalls, as it is a relatively short test of 20 minutes over 11km at temperatures of 20-30°C with a maximum speed of 120km/h. Because of this, it has become outdated, with the industry as a whole questioning its delivery of economy-figures which are unachievable in reality.

As a result, the Worldwide Harmonized Light Vehicle Test Procedure (WLTP) was introduced in 2017, which, because it is based on real driving data, better matches on-road performance. A 30minute test, over 23km, it includes an increased maximum speed of 131km per hour.

As a compliment to WLTP, Europe is the first region in the world to introduce Real Driving Emissions (RDE), which marks a major leap in the testing of car emissions. RDE is a test of up to 2 hours over approximately 90km at temperatures of -7°C up to 35°C and speeds of up to 160km per hour. In addition, it introduces, for the first time, the impact of driving up and down hills, up to 1300m.

Thus, not only are we seeing tighter legislation, but also, importantly, new testing procedures that can accurately and unequivocally ensure that this legislation works in practice.

At a global level, catalyst complexity is increasing, driven by tightening emissions standards. Diesel engines, in particular, will come under legislative pressure, and all will likely require Diesel Particulate Filters (DPFs). In the short term, this is beneficial for those involved in PGM recovery, but in the medium- to long-term DPFs are likely to be replaced by Selective Catalytic Reduction Filter (SCRF) technology, which improves system compactness and enables earlier Nitrogen Oxide (NOx) conversion but does not require PGMs as catalysts.

Complexity is also increasing in the after-treatment of gasoline, with the increasing fitment of Gasoline Particulate Filters (GPFs), and diesel, with greater demand for Selective Catalytic Reduction (SCR) systems and a trend towards 100% Ammonia Slip Catalyst (ASC) installation.

A number of alternatives to gasoline and diesel engines have been, or are being developed, and this will have a significant impact on the PGM market.

Currently, and in the short term, a very small market sector, with estimated sales of 24,000 vehicles by 2025, FCEVs do require platinum as a catalyst.

There are, of course, numerous predictions for how the electric market will grow, and how it will impact the traditional market. One globally recognized analyst, Bloomberg, put forward the following forecast in its “Long Term Electric Vehicle Outlook”, in May 2018, suggesting that by 2040, electric vehicles could account for as much as 55% of the market.

As palladium prices have soared, there has been a lot of talk about increasing the platinum content, at the expense of palladium, in catalysts.

Johnson Matthey’s view is that whilst substitution in gasoline is possible, a number of technical and practical challenges have first to be overcome, so it is unlikely to occur rapidly. More development work is needed to match the performance of existing Palladium / Rhodium systems. The key issues for three-way catalysts using platinum are the inferior CO and Nox light-off, poorer high-speed NOx conversion, and lower durability since platinum is less stable than palladium in gasoline exhaust. At a time when full compliance with the recently introduced RDE testing is front-of-mind, manufacturers will want to be 100% sure the catalyst system is robust before they make any changes.

For each type of catalyst, Johnson Matthey is suggesting the following ramifications:

With assay trending generally higher, palladium and rhodium values will continue to rise, although platinum substitution for palladium is likely in the longer term.

Assay and volume generally constant for platinum and palladium.

At a global level catalyst complexity is increasing, driven by tightening emissions standards.

It is, though difficult to see if emissions can be sensibly reduced much further. Therefore, performance and compliance in the real world are key, with RDE over the vehicle lifetime becoming the new standard.

A combination of “Diesel gate”, complexity and uncertainty are creating a risk aversion mindset.

Hybrids are likely to be neutral to positive for PGM demand.

Platinum substitution for palladium likely in TWCs / GPFs in the longer-term.

The penetration rate for Battery Electric Vehicles is an uncertainty, but, PGM demand will grow.