Even though easing of lockdown restrictions are now underway, The COVID-19 pandemic continues to have a major global impact on lives, on businesses, and economies. The virus is not only a tragic health pandemic but is also causing the steepest, deepest economic contraction in living memory, with collapses in both the supply and demand sides of the economy. So we make no apologies for revisiting the subject for a further look at how it continues to affect the catalytic converter industry

There is no doubt that 2019 was very much a story of rising demand. The auto industry is critical to Platinum Group Metals and at the beginning of 2020, prior to the arrival of COVID-19, new highs in automotive demand were recorded. Car sales around the world, especially in places like China, continued to rise strongly, and this, combined with the tightening of emissions legislation in many countries that drives greater loadings of catalysts on vehicles, meant that PGM demand was higher than ever before.

This all changed with COVID-19, and with the resultant national lockdowns that were implemented. The effect on supply, demand, and the resultant price volatility has been dramatic.

Since our last report, lockdowns have started to ease in varying degrees, and there has been much debate about the nature of recovery - would it be V-shaped (i.e. a quick bounce-back) U-shaped (some time in the doldrums before sharp recovery), W-shaped (as a result of multiple lockdowns from virus spikes) or L-shaped (a prolonged and slow recovery)?

The Manufacturing Purchasing Managers Index (MPMI), an index of the prevailing direction of economic trends in the manufacturing sector, points to a possible (and highly desired) V-shaped bounce back. This is certainly evident in China, where a combination of aggressive government stimuli and pent-up demand is leading to a quick recovery, with the same true, to a lesser extent, in the USA.

Covid-19 pandemic has a dramatic impact on economic growth

There is a prevailing view that as the economy shows signs of normalizing around the world, new car sales will follow suit. This is based primarily on current trends in China, where sales in May surprisingly showed a 12% year-on-year increase, although it has to be said that the recovery there is being created by the government stimulus packages and an interesting second phenomenon - there is evidence that in China, where car ownership is only around 20%, people are looking to purchase a car for the first time in order to create their own transport “bubble”, and so avoid the potential COVID-19 threat that exists from traveling on crowded public transport. Initial indications in the USA suggest it could be following the V-shaped trend but Europe is still lagging behind. In both these regions though, the likelihood of recovery is influenced by concerns over using public transport is less likely, with car ownership in the western hemisphere already in a 60-80% range.

Car production and sales dropped steeply in China in Q1 but now shows signs of normalizing.
Car sales in the US and Europe are expected to fall dramatically before recovering.

Other factors that are, and will, influence car sales, and PGM usage are:

As showrooms across the nation re-open, cheap credit and low-interest rates keep buyers interested and will help stimulate pent-up demand.

Varying by country, Europe is seeing a very patchy recovery and stimulus measures are likely to focus on greener, battery-electric vehicles, possibly offering a long-term threat to PGM demand. No delays to emissions legislation are envisaged and the fall in diesel share continues, now accounting for less than 30% of total sales, a continuing fall out from the 2015 “Dieselgate” scandal. One interesting development is that of people working from home. If this were to become a permanent trend, a second family car may become superfluous, thereby suppressing overall car sales recovery. 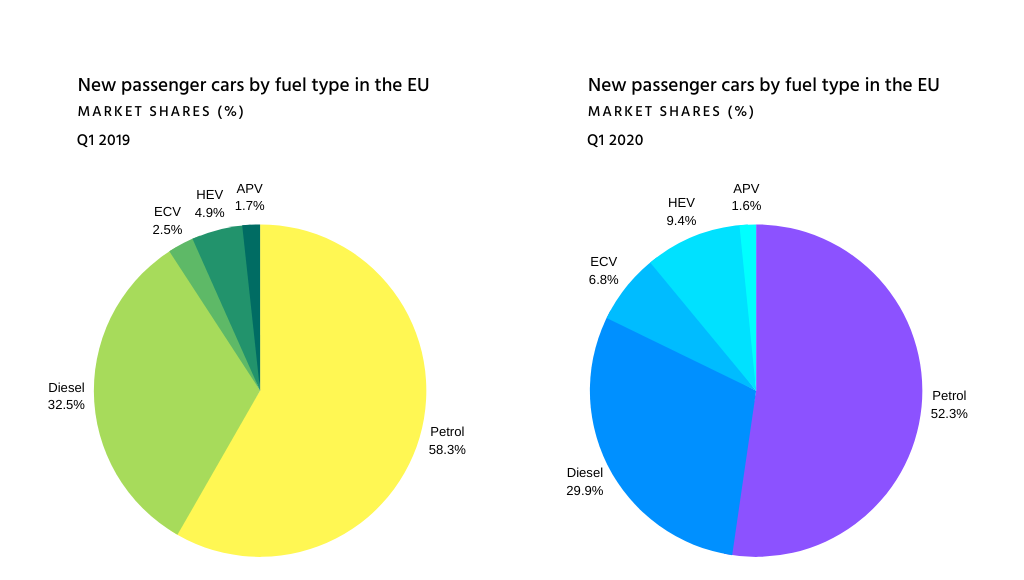 Source: acea
The continuing drop in diesel market shares is negative for platinum demand. Growth in diesel hybrids )HEVs) has some offsetting effect

A key positive for PGMs is HGV legislation, due for implementation later this year in both countries, that will push up average loadings over the next 2-3 years. Additionally tighter NOx emissions legislation on light-duty vehicles as they move towards Euro 6 standards will favor palladium and rhodium.

However, China has announced a 6-month delay until January 2021 in implementation due to the impact of COVID-19. This will, though, only affect around 30% of new vehicles, as major conurbations like Beijing, Tianjin, and Shanghai had already introduced the new standards, ahead of schedule.

We have reported before in Eco Cat News the issue of substituting platinum for palladium due to the price differential, and in the current environment, this becomes a more pressing discussion. However, the downside of the need to re-engineer and redesign the vehicle layout means the jury is still out on this, as potential savings are offset by the investment required, at a time when manufacturers are strapped for cash.

Previously we have reported that industry experts have been reluctant to provide a forecast for this year due to so many unknowns at the time. Now, however, Mitsubishi has made the not unexpected forecast that 2020 will see a substantial fall in PGM demand as a result of the decline in vehicle sales. The chart below shows historical data provided by Johnson Matthey overlaid with Mitsubishi’s 2020 forecast. Rhodium shows the smallest decline due to its increased loadings for forthcoming new legislation that will tighten emission levels still further. Platinum, with its broader spectrum of uses, is also impacted by the jewelry business, especially in China, and the petrochemical industry, both of which are also suffering currently.

This article has covered half of the story - the demand for PGMs. Our next issue will cover the PGM supply situation going forward, for both new and recovered metals, and that promises to be an equally volatile tale…