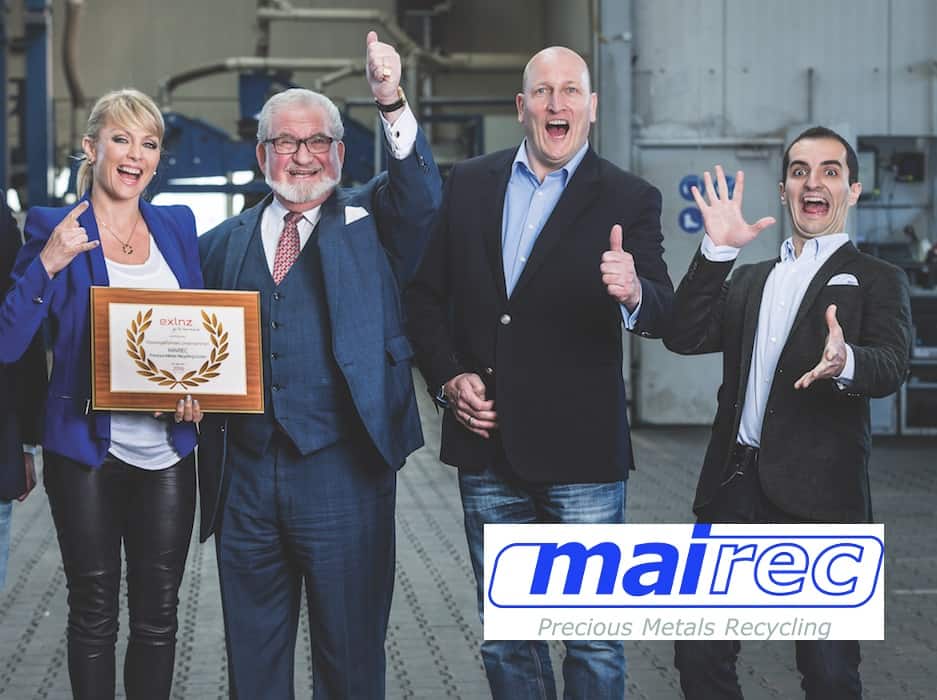 Much Ado About Nothing? Hardly!

A tempest is brewing in the American catalytic converter industry with a cast and plot akin to a Shakespearean play. The potential impact on a business that has traditionally functioned on the premise of honesty and transparency cannot be underestimated.

A major German recycling company, MAIREC, with a subsidiary operation in USA, is currently being sued by two American scrap catalytic converter recovery companies for fraudulent practices and scams involving the contamination of samples and the altering of assays to the detriment of their business.

MAIREC was established in 2003 by husband and wife team Julia and Thomas Maier and is now a “successful” recycling company specializing in the recovery of precious metals from business and industrial scrap. PGM recovery from catalytic converters is a major source of the company’s revenue. In 2015, the Maier’s expanded their operation into USA, with the foundation of MAIREC Precious Metals U.S. Inc., appointing Mikhail Khaimov as the company’s President. Khaimov, as we will show, has a leading role in this tale.

366 International and PGM of Texas are both family-owned catalytic converter recovery businesses in Kentucky and Texas respectively, receiving and processing shipments from customers all over the USA.

In 2016, both signed an Exclusive Supply Agreement (ESA) with MAIREC to supply all their catalysts. MAIREC was required to pay both companies based on contractually agreed values for metal return percentages in each lot shipped.

Under the terms of the ESA agreement between MAIREC and both plaintiffs, Mairec US was required to take a sample of the PGMs from all batches supplied by the companies and weigh and assay the sample to determine the precise metal content of the full batch. The assay process is a critical part of the business relationship between all parties, with the plaintiffs and their customers totally reliant on the assay values to determine the metal percentage values and thus determine what price would be paid for each batch.

MAIREC carried out this analysis in the US, then in Germany and plaintiffs’ personnel never felt it necessary to be present when this took place, underlining the trust and transparency that has always (at least until now) existed in the industry. The ESA, as well as industry standards, demand that assays be conducted in a fair and scrupulous manner so that suppliers like 366 and PGM of Texas are not scammed or defrauded.

However, over a period of time during 2018, 366 and its customers complained to company president Mikhail Khaimov about the low metal percentages being reported. Despite being assured by Khaimov that all analyses were scientifically and fairly conducted, 366 requested a neutral third-party lab to assay a particular batch – an agreed provision within the ESA agreement.

This independent review reported nothing amiss, showing results similar to MAIREC’s own, and therefore 366 had no option but to continue to work with MAIREC, despite continuing poor returns that resulted in 366 losing both earnings and many of its customers.

Matters came to a head in September 2018, when an employee of 366, was told by a manager of MAIREC US, Mark Hartigm, that 366 had been the victim of a fraud scheme instituted by Khaimov and the company. This fraud involved adding a specified amount of contaminant – sand, glass or other non-PGM element – to each sample, thus underreporting the true metal percentage in a given batch. This contaminant was introduced to every batch and, as MAIREC also supplied the sample to the independent lab, this would explain the similarity in results. The additional metals removed from each 366 sample was then paid out as pure profit to MAIREC.

Upon this exposure, a meeting was convened in USA, attended by the German owners, Julia and Thomas Maier, at which Julia Maier stated she was shocked by these revelations and promised a full and thorough “independent audit”, swearing to remedy the situation. Her stance was that Khaimov had been orchestrating the low assays, independent of any direction from Germany. Indeed, a number of US employees admitted to contaminating samples, but denied that it was a dishonest or fraudulent practice! There is, though, SMS and email communications that suggest the Maiers were fully aware, and party to, the fraudulent activities, as this one email example, submitted to the courts as evidence, suggests: 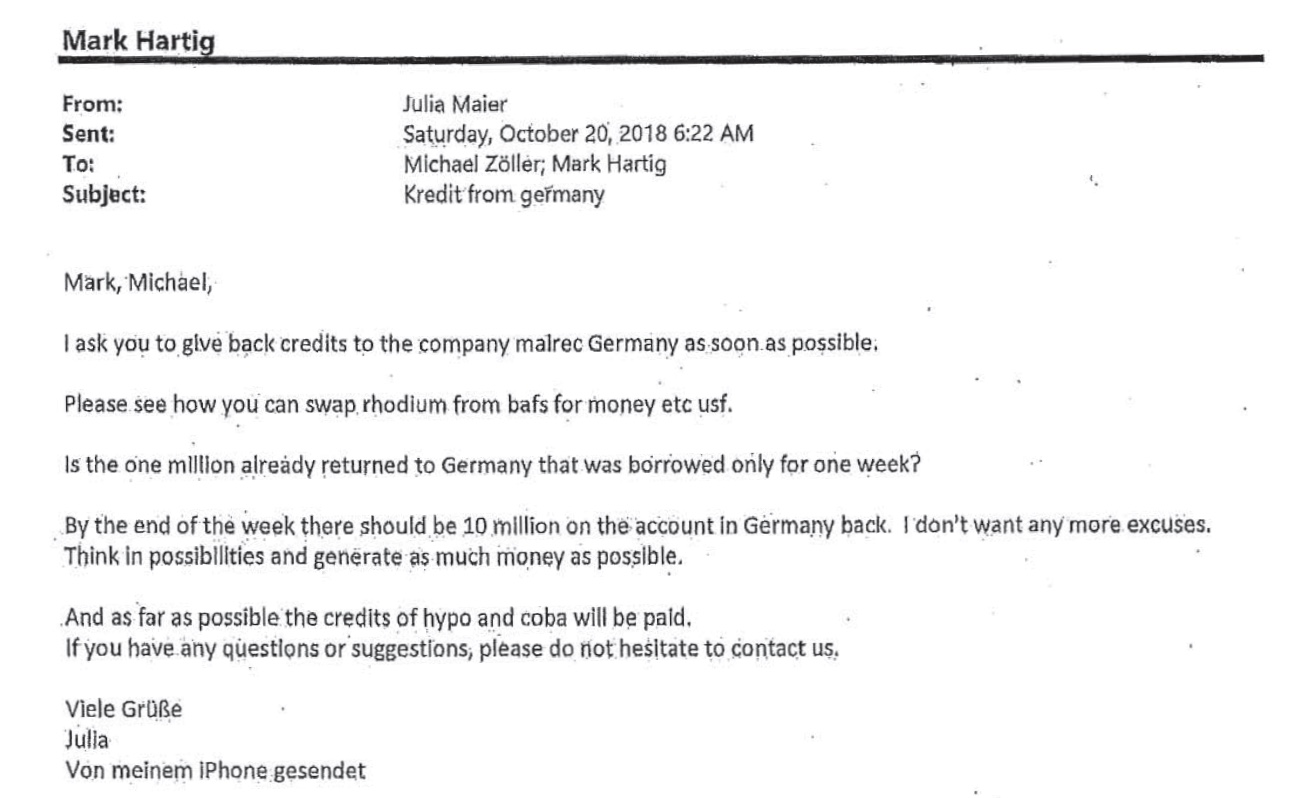 Despite continuous reassurances from Julia Maier, there appears to have been no effort on the part of the MAIREC to remedy their apparent scam of contaminating assays, and 366 have now decided on taking out a lawsuit in civil court.

MAIREC is charged with breach of contract,  breach of contract accompanied by a fraudulent act, fraud and violation of unfair trade practices act. 366 has requested a trial by jury and the case is expected to come to court 2019.

PGM of Texas first learned of MAIREC’s scheme to fraudulently “rig” assays as a result of of 366’s detailed complaint. Although seemingly ignorant of the possibility that their assays were not being scientifically and fairly conducted, the company nevertheless contacted MAIREC USA’s President, Mikhail Khaimov to inquire as to whether PGM of Texas had been scammed in the same way as 366.

Towards the end of October 2018, Khaimov, admitted that MAIREC did indeed intentionally “rig” PGM of Texas’ assays in the same way, confirmed  in a series of text messages…

“I knew what I did was wrong.”

“I was told this is how MAIREC does biz…. I was told what to do because it’s MAIREC’s standard business practice. It wasn’t personal, I was told to boost profit.”

PGM v. Mairec
Texts between Allen Hickman, Jr. and Mikhail Khaimov (former Pres. of Mairec in the US) : 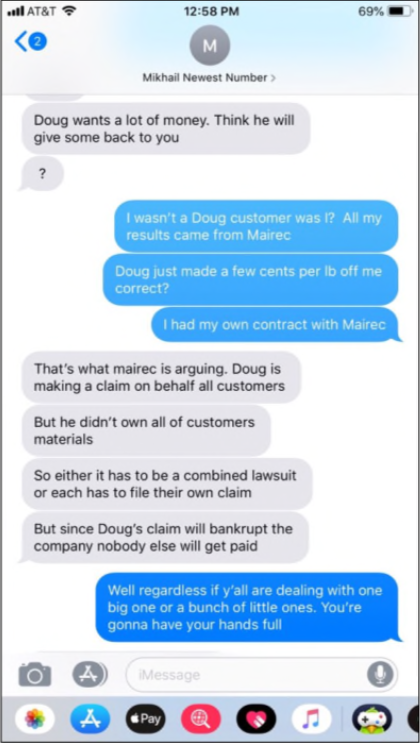 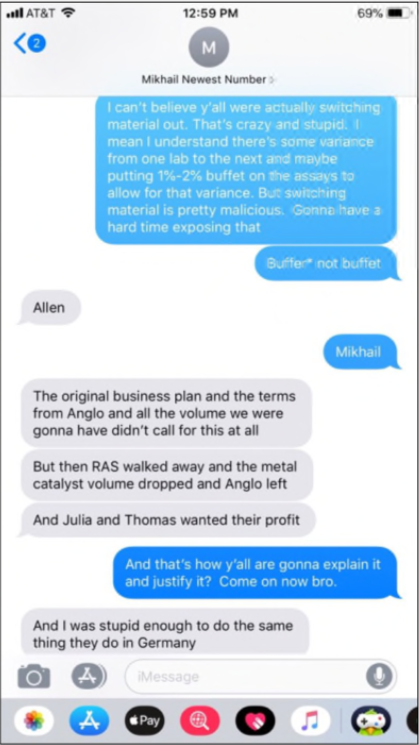 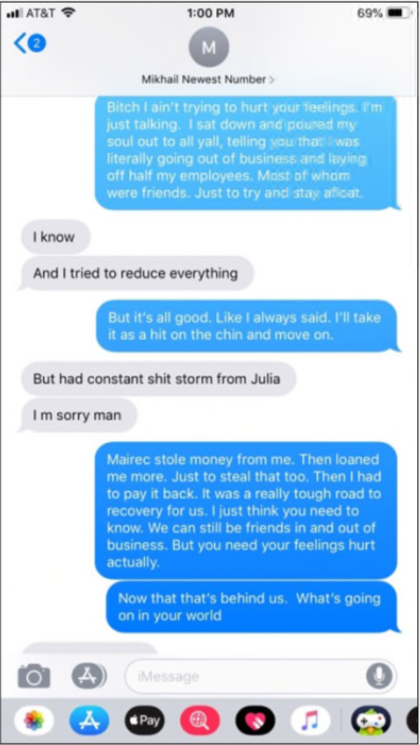 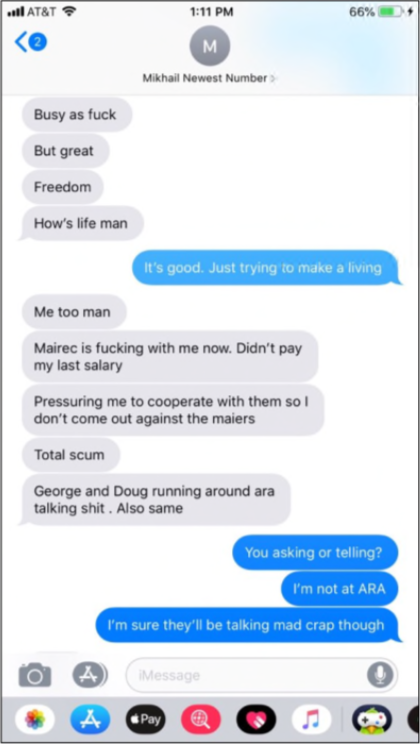 Khaimov also attempted to argue that rigging of assays was common among many German refiners, but ultimately, he was “ashamed” of his actions.

With all this evidence available, PGM of Texas launched a similar lawsuit to 366 against MAIREC in November 2018

That fraud has occurred is indisputable – Mikhail Khaimov has admitted to that, in writing. The Maiers claim it is purely a USA issue and that they were not involved; the evidence, however, suggests otherwise. As the court records state:

“It would seem apparent that MAIREC made intentionally false representations for the purposes of inducing 366 and PGM of Texas to continue its business relationship with them and to continue supplying them with catalytic converters under the terms of the ESA.”

In an attempt to deceive its customers, including 366 and PGM of Texas, into trusting MAIREC and its method of business operations, it even made the following representations on its website:

“Relationships are built on trust – that is what we want from you. We are ready to earn it, and we are convinced we will succeed. We can accomplish this goal by providing you with the highest quality of work, delivering excellent results, and offering the most optimal and competitive pricing structure. And by the same token, we can earn your trust, because you can fully rely on us – no ifs or buts – unconditionally, in every aspect of what we do.”

MAIREC’s conduct, including blatant deception and the concealment of the practice of contaminating assays, has resulted in multiple and continuing acts of fraud that both breached the terms of the ESAs and damaged 366 and PGM of Texas (and their customers) over the life of the ESA. As a direct result of the fraudulent and false representations, both companies are likely to be awarded damages – 366 are claiming a loss of earnings over the life of the ESA of $US 16 million, PGM of Texas a loss of $US 3 million. In addition, both are claiming punitive damages to reflect loss of goodwill and, indeed, customers, as a result of MAIREC’s actions.

Are there other MAIREC ESA’s in force in the USA, and, if so, are these customers also the recipients of a scam?

We have apparent proof of fraudulent actions by the company in the USA, but who is to say that MAIREC isn’t undertaking similar activity in its home European marketplace?

As we mentioned at the beginning of this article, the catalytic converter recovery industry has traditionally enjoyed honest, open and transparent business relationships. Now, though, the MAIREC lawsuits have brought this premise into serious question.

Perhaps part of the solution in helping eradicate fraudulent activity in the market is technology. The industry has seen increasing technological advancement over recent years

Equipment investment that allows efficient analysis and cutting and refining of all models of catalytic converters and diesel particulate filters.

Modern technically advanced, laboratories but coupled with an “open door” policy that welcomes customer visits at any time.

It is not difficult today to monitor the market prices for all precious metals to ensure the cat prices are fair and current.

Ultimately though, the industry is still a “people business” and remains reliant on trust and transparency. Companies with a proven history of dealing with its suppliers, who have made the investment in modern facilities and who offer friendly, personal assistance are the ones that are likely to offer fair, competitive and timely services.